About Dark and Other Stories

​Ghost stories are no fun if they’re entirely made up. The problem with real ghost stories is that we can’t explain what is supposed to be going on, even if we successfully remember it. Sometimes we can’t be sure anything happened. The most truthful ghost stories are likely to be told by those who struggle to believe their own experience.
​
“Percipient” is defined as “one who perceives.”   Things perceived that appear to be true are “veridical.” The term “apparitions” is reserved for things that appear to be real but have some quality that tells us in retrospect that they are not real, in the mondial or sublunary sense. Veridical apparitions are evidently real at the time they are seen. This is what distinguishes the apparition from the hallucination. A hallucination is a loss of sensory order and possibly of sensory interpretive control as well. In an apparition, the percipient’s senses seem as functional as ever—but some apparitional element has intruded into the usual reality. It’s a spectre. And we don’t really know what it is or where it comes from. Nothing has changed since Shakespeare’s time, when the most practical and responsible person might still say, “It harrows me with fear and wonder.”  It will be spoke to. “Thou art a scholar. Speak to it, Horatio.”
​Of the six pieces in Dark and Other Stories – “Dark”, “Hanging Valley Breakdown”, “Remote”, “Banjo”, “The Stony Point Poltergeist”, and “Off the Map” – the only fully nonfictional piece is “The Stony Point Poltergeist.” Only the names have been changed in that story. I lived in town when I wrote it. All these years later, I now live a mile from the abandoned Wight farm. I think about that sometimes, at night.
​
The only fully fictional piece is “Off the Map.” I have had long-haul hikers tell me it seemed the most realistic piece in the collection. I find that curious, because the central incident or climax is a Lovecraft homage. The rest of it is pretty veridical though, and West Virginia is rich in spectral terrains. The upper valley of the Cheat is what I had in mind, particularly John’s Camp Shelter and Wildell.
​ “Hanging Valley Breakdown” is not that far from the way things happened. It’s been spiced up just a bit, around the edges. I guess the single biggest alteration is the deputy sheriff’s interest in which cars had which license plates. The real deputy was totally puzzled and did not really know why he was asking, except for being told to by his boss. The events in “Hanging Valley Breakdown” seemed quite daring and esoteric back in the Carter Administration.
​
“Remote” is rife with fictional elements. There is no Blackwater College deep in the haunted hills of West Virginia. Blackwater is, I guess, probably Marlinton but it’s not a very good description of Marlinton. I also thought of Covington when I wrote the story, but Covington is quite a bit more complex than the fictional Blackwater. The principal characters, however, are barely fictional at all. There will never be a working explanation for the way some people disappear. And we can never predict exactly what we’ll see on a mountain road at midnight.
​“Banjo” was written when I was a graduate student as a magazine submission. I have a sort of tender feeling for this old story. I notice I invested the protagonist with some modest academic responsibilities. The characters are probably a picture of what Young Gary thought of as respectability. The rest is a warning. Don’t get too reckless about looking through cracks.
​
Finally, there is “Dark.” This story, or the ground conditions for this story, profoundly affected my life, probably for the worse. I was an IATSE union projectionist in the old Movie Palace downtown (now known once again as the Jefferson) for a few years and then an assistant theater manager for even longer. “Dark” started as an attempt to keep a diary of odd things that happened there, like Paul Kammerer’s notebook of coincidences described in Arthur Koestler’s The Case of the Midwife Toad. It has been through uncountable drafts since. Nothing like a story that I could live with ever emerged. It’s monstrously censored but I have never found any way to uncensor it. The best versions seemed merely insane. This version has to do.
Here are a couple of pages of "Dark" in graphic novel form, done by my artist daughter Lara. An alternate way of telling this story: 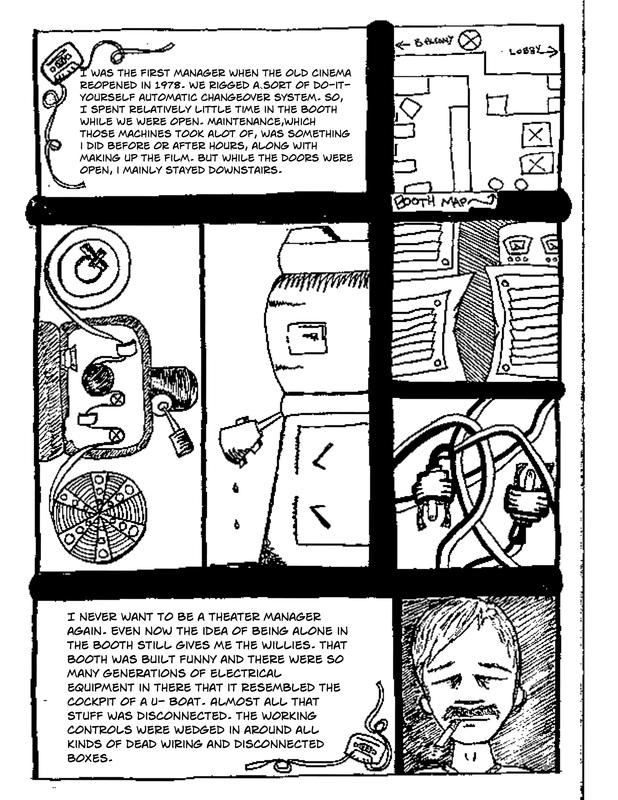 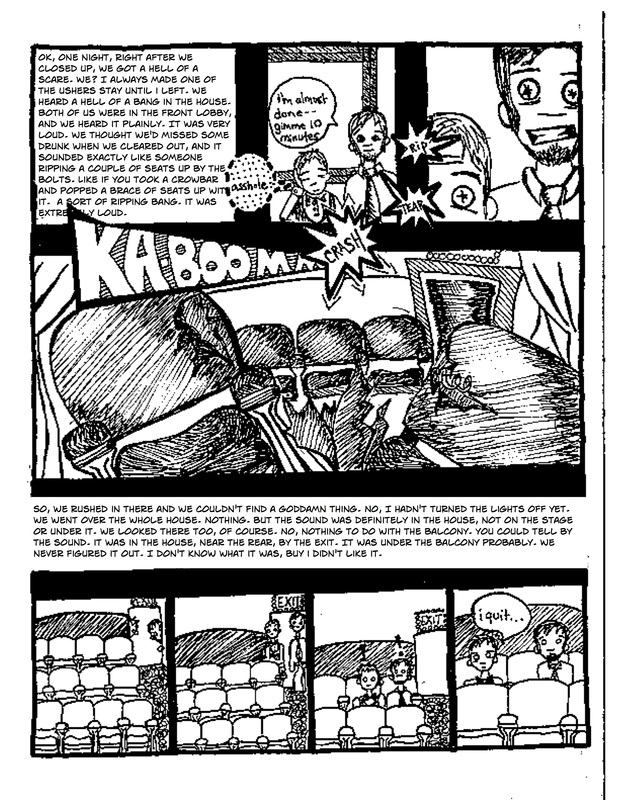