The Life of the Southern Skylark

The Southern Skylark has a long history. It began in 1976 or 1977 as a short story, informed by the local history and lore as well as hell-raising generally shared by the night shift proofreaders at a local publishing company with whom I found myself — we had a lot of night to kill. The original Kanawha Canal piece twinned out into a second short story about stray dogs in 19th century Lynchburg, and then both fragments played dead for years since there is actually no such genre as the historical fiction short story. In 1981, as a graduate student in the then new MFA program at UVA, I was obliged to come up with a master’s thesis. I returned to this fragment and converted it into a larger and even more ragged fragment and handed that in to the school and all was well in my little world.

Two or three years later, feeling it would be a shame not to finish the piece after wasting hours of work on it, I devised a completed draft. It was already clear that this was a step toward a novel but only a step.

It would be offensive to generations of American historians to say that the 1830s are a neglected period in American history, but it is safe to say that the Randolph-Calhoun era has not had a great deal of play in the public imagination. That is our loss, if only in subtle and useless ways. The period saw the collapse of the best-intentioned practical effort to end American slavery as well as the Nullification Crisis that did as much as
anything else to sectionalize American politics and set the stage for the Civil War. This was also an era of mechanical progress and, for lack of a better phrase, cultural growth. To “observe” or really just glimpse this society in the medium of fiction, it seemed self-evident that the narrator should be British for several reasons. First, an unbiased American narrator was not easily imagined; second, the era of the uplifting lecture had begun; third, Romantic poetry and Gothic literature were sweeping the land in practically viral fashion. Thus the character of A. J. Hingely, British dilettante lecturer on “The Lives of the Poets.”

Nothing is more loathsome than historical exposition, so an early goal in The Southern Skylark was to avoid any trace of such a thing. The other important early goal was to make sure I was enjoying myself quite a lot. I always liked working on this book and there are at least a dozen
versions. A penultimate stage was reached in 1991 or 1992 when a draft of it was as close as the author’s questionnaire in a university press venue. It’s fortunate for the book that this did not happen. The most important goal of The Southern Skylark had not been reached: to pay some justified attention to the Romantic movement itself and to the poetry on which Hingely so desperately wants to lecture.

Recalling our school days, we may think of Keats, Shelley and Byron as schoolwork or as obstacles to our free time but Romantic poetry was among the vital revolutionary literature of its day. Shelley’s “A Defense of Poetry,” a then-largely-unknown essay Hingely is trying to popularize, could just as well be titled “A Defense of Human Freedom” because it is as much that as anything by Jefferson or Paine. And where more socially malapropos and yet paradoxically appropriate to bring that up than in slaveholding America? The proper romanticization of The Southern
Skylark required a third period of work and several more drafts, only recently concluded. It would have been much easier to write a dramatically
longer and heavier book but length and gloom were not the goals. The goal was the thoughtless joy of the lark ascending. 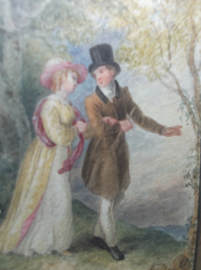