I started Rockfish in 1995, substantially finished it in 2002 and published it in 2009. An entire American generation has grown up since I started this book and another generation will shortly follow. Nonetheless, the racial issues portrayed in Rockfish are still thriving in Central Virginia. As recently as the summer of 2017, Ku Klux Klan members and American Nazis violently invaded Charlottesville, causing many injuries and loss of life. Clearly, Americans and certainly Virginians still remain genealogically fraught with themselves, literally on a local level.

Reflecting on local and national events over the past year, in the summer of 2018 I decided to revise and re-issue Rockfish. To a considerable degree, Rockfish is a book exploring how racial identities were formed and originally came into tension in Central Virginia, starting with the British settlement period. The basis of the book is merely history. I wanted to go back and make sure nothing obstructed its original purpose, which is as important now as it ever has been.

Race has meant different things at different times over the last several centuries. Race has never been a fixed concept. Definitions of race have varied from generation to generation for many reasons and we can assume that race, as a concept, will continue to evolve and vary in years to come. Ironically, the characters in Rockfish do not always care very much about race themselves; they are naturally more concerned with life, liberty and the pursuit of happiness—as most people are. But no Virginia community could escape the scars of slavery, civil war, Jim Crow, eugenics and segregation. Race was forced to matter; and people adapted.

Rockfish probably owes its existence to a collection of short stories I wrote around 1980, briefly collected as Ten Rockfish Tales. One of the Ten Rockfish Tales was published in Southern Exposure magazine and another in the Virginia Review student magazine at the University of Virginia. The tales were loosely fictionalized stories told by my grandparents' generation, many of them concerning their own parents or grandparents. Ten Rockfish Tales could just as easily have been called “Grandparent Stories.” Most of the stories dated from the 1880s to the 1920s. The ten selected tales were a representative assortment of stories I had heard repeatedly while growing up. Ten Rockfish Tales was something like a 1980 translation of what people who had reached their own narrative maturity in the 1930s and 1940s believed they remembered about the end of the 19th century. The yarns included pseudo-memories and legends about earlier periods. They were demonstrably subjective and not fully accurate.

This reflects a very entertaining truth; history, for all its seriousness, barely exists on the community level. There really is no such genre as rural community history. Such accounts, always highly personal, soon turn into lore and then vanish with the last teller.

I started working on Rockfish in 1995 as a relaxing experiment. We most often look at history in reverse, backwards from the present. Often we are looking for causes and origins in the past, to explain or manipulate the present. I think this is a human emotional need, like the need for sex and food. We abhor a vacuum and demand an explanation.

The people of the past, of course, lived forward from the present, the same direction in which we live. If we want to understand the past, we have to join them and view history as if it had not yet happened.

There has been a tremendous shift in the world since the old Rockfish days. We modern people tend to see our life experiences as events in the larger world around us and think we have some choices in the roles we act in the world. To the people of the past, experiences in life were the world, and many people had no direct experience beyond their own community. Choice was a luxury and few had it. In this sense, writing Rockfish was for me an expedition to rediscover the center of the earth. Of course everywhere is the center of the earth, and every rural crossroads is or was a Rockfish in its day, and may be so again. Rockfish in this sense is more generalized than the story perhaps sounds.

Rockfish is a real place, but the setting of Rockfish is a conflation of several Central Virginia locations. In particular, in my Rockfish narrative I have omitted an actual event in 1969 that destroyed many of the homes and buildings of the community, and caused much suffering and death in Nelson County, Hurricane Camille. The family narratives also conflate a number of local genealogies. The story begins with the French and Indian War and ends on the day before Thanksgiving, 2001. I drafted the last section on November 21, 2001. People were much exercised by major events in recent history that year, and with good reason. The ending of Rockfish reflects that.
What Rockfish Looks Like Now
​Rockfish today is being swallowed by forest, at the moment anyway. When I was growing up, Rockfish was much more open. My father told me that when he was growing up in the 1930s, the Rockfish landscape was largely abandoned fields turning into scrub. When my grandparents were young, the landscape of Rockfish was mainly field, pasture or orchard between narrow woods; there was no primordial timber left and deer were scarce. Below are some recent pictures from Rockfish. The scrub in the right foreground was flinty, skinned pasture when I was in my teens. 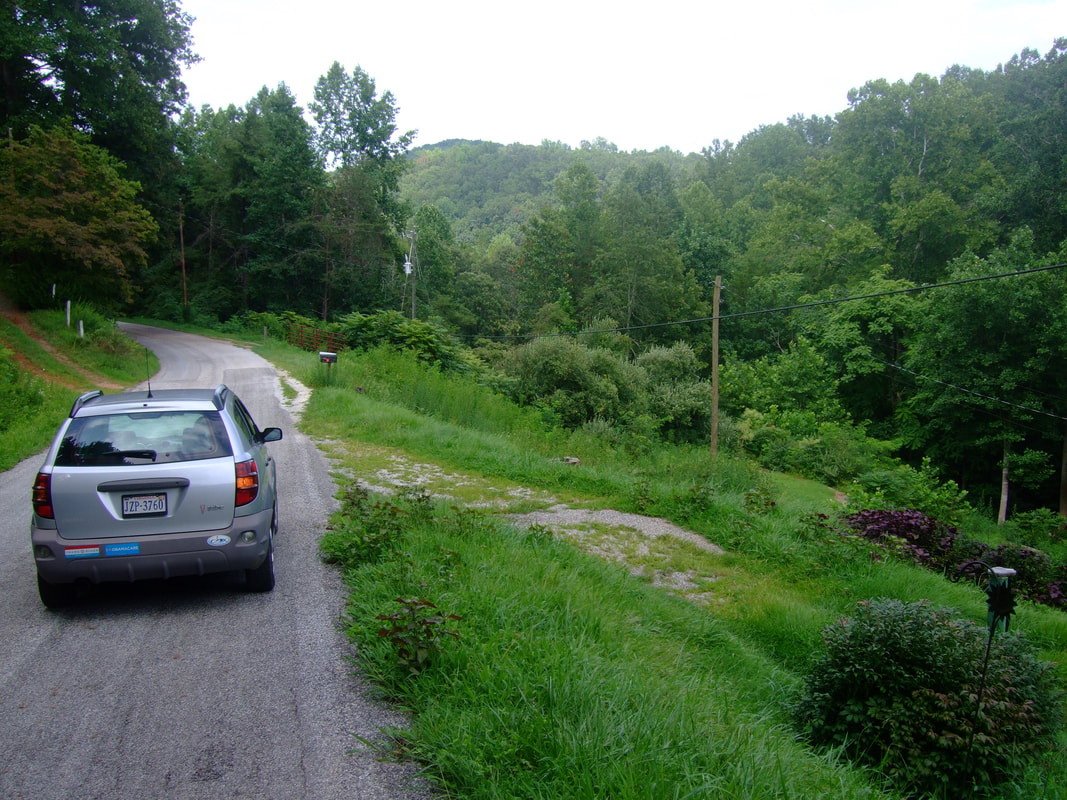 Parked near the head of Drumheller Hollow 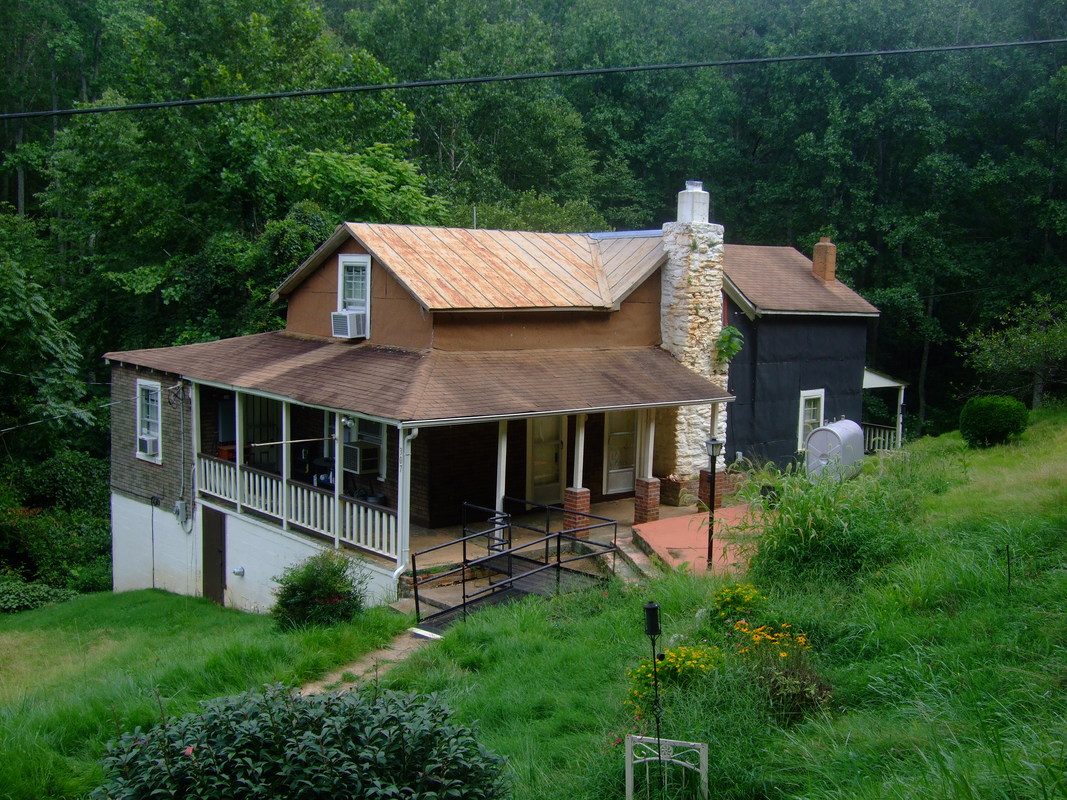 An unrestored 18th Century survivor, clad in porches and additions of the 19th and 20th century 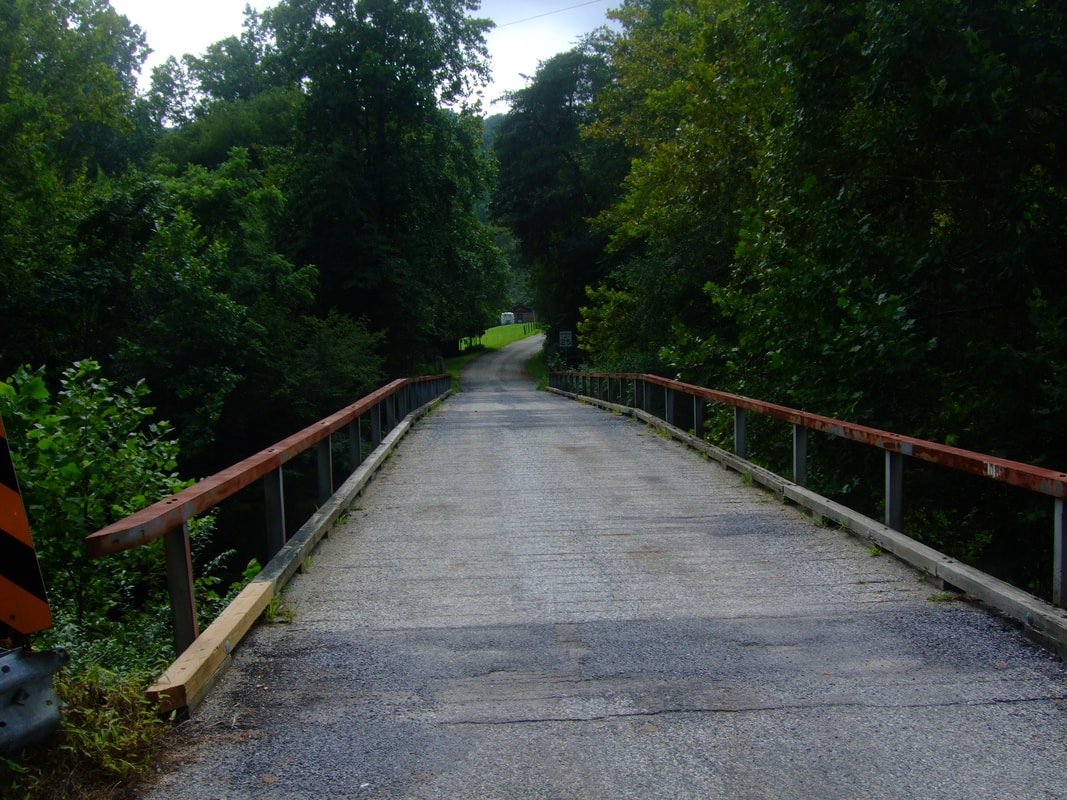 ​Bridge to the center of the world 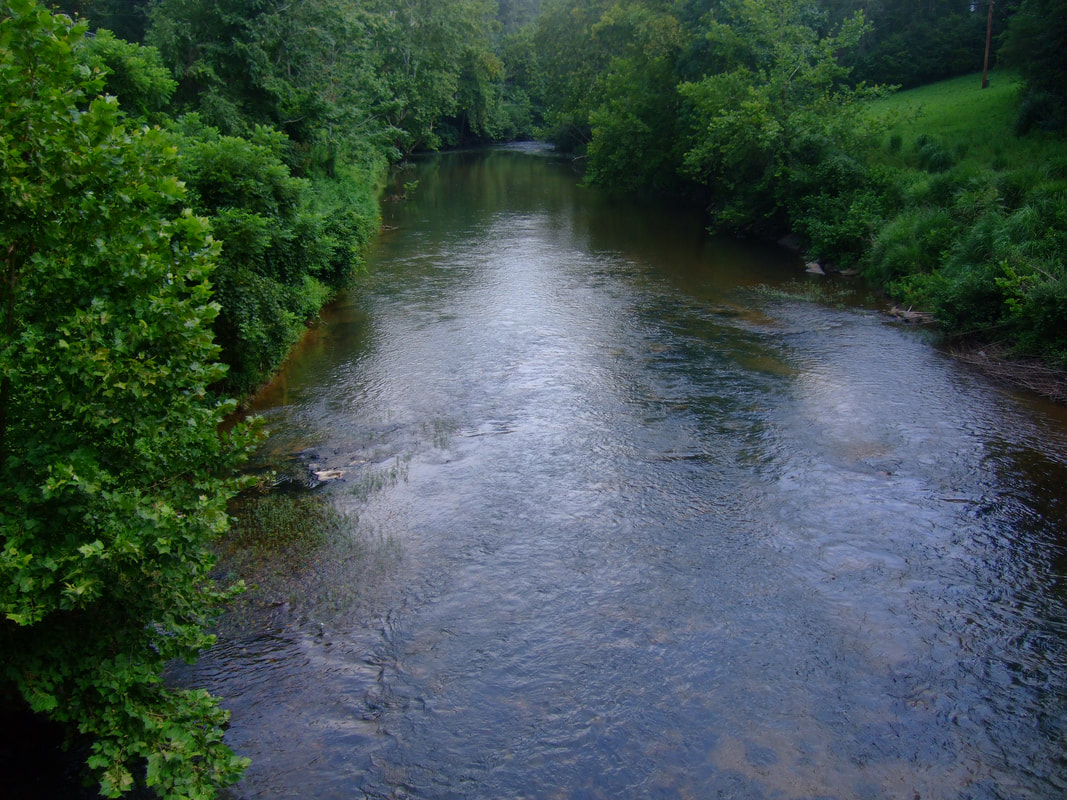 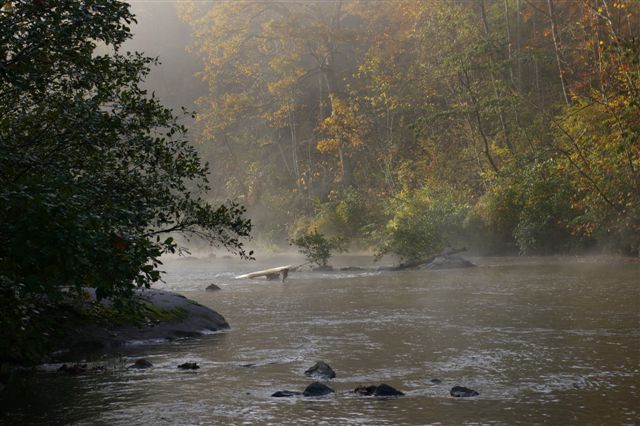 ​Fall on the river (photograph by Alan Mawyer) 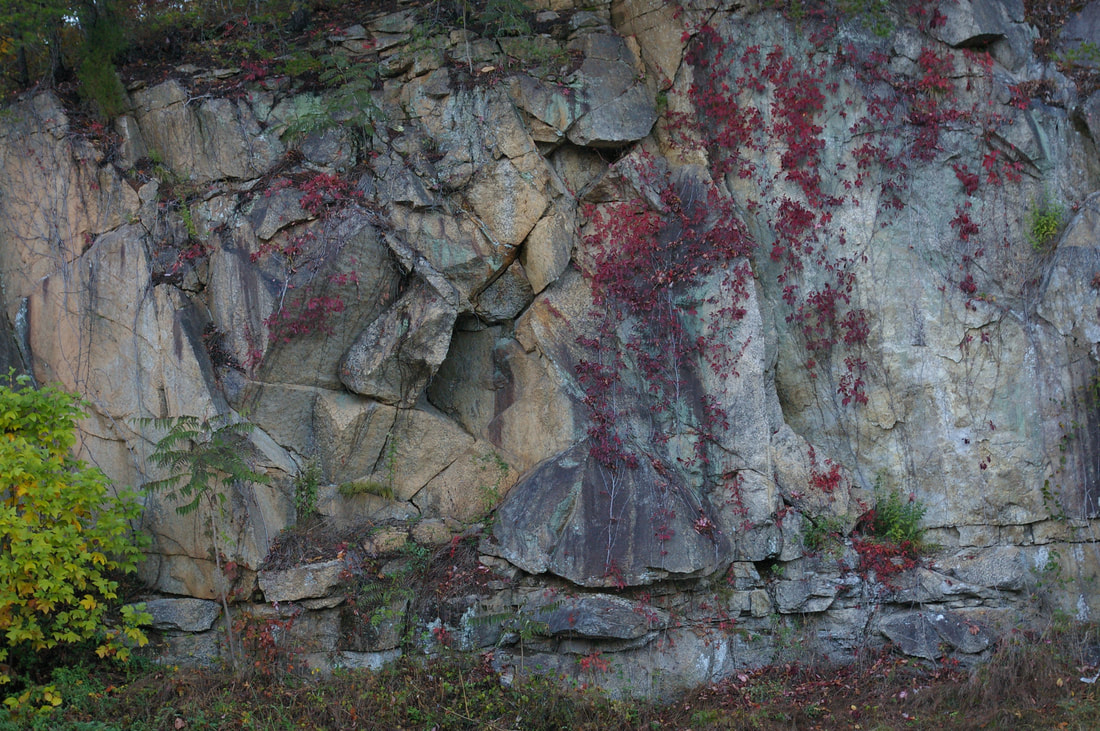 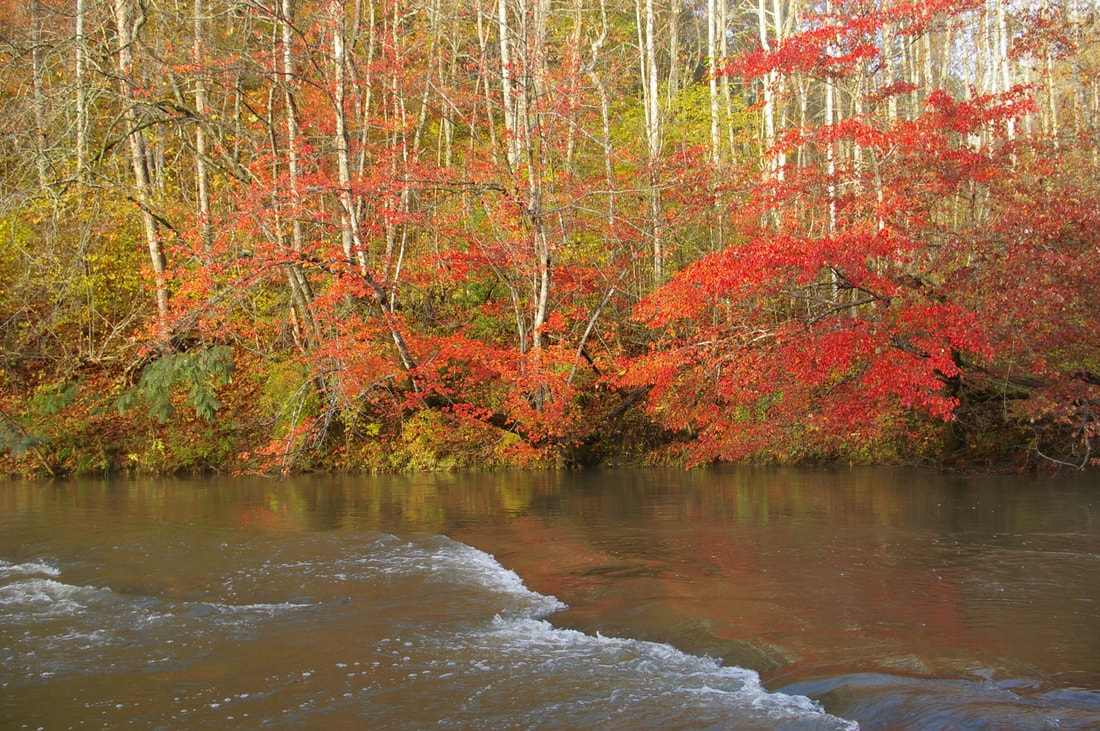 Near the old mill (photograph by Alan Mawyer) 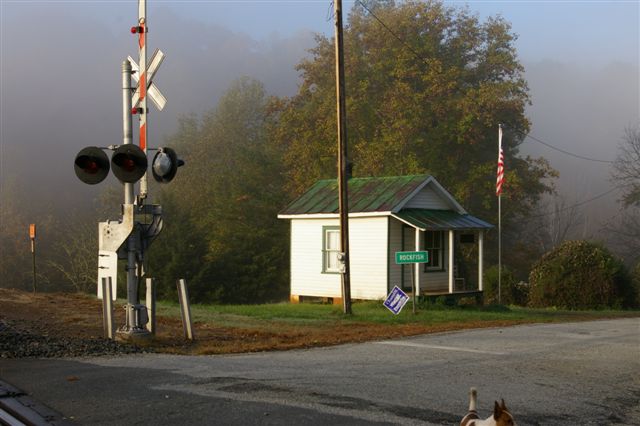 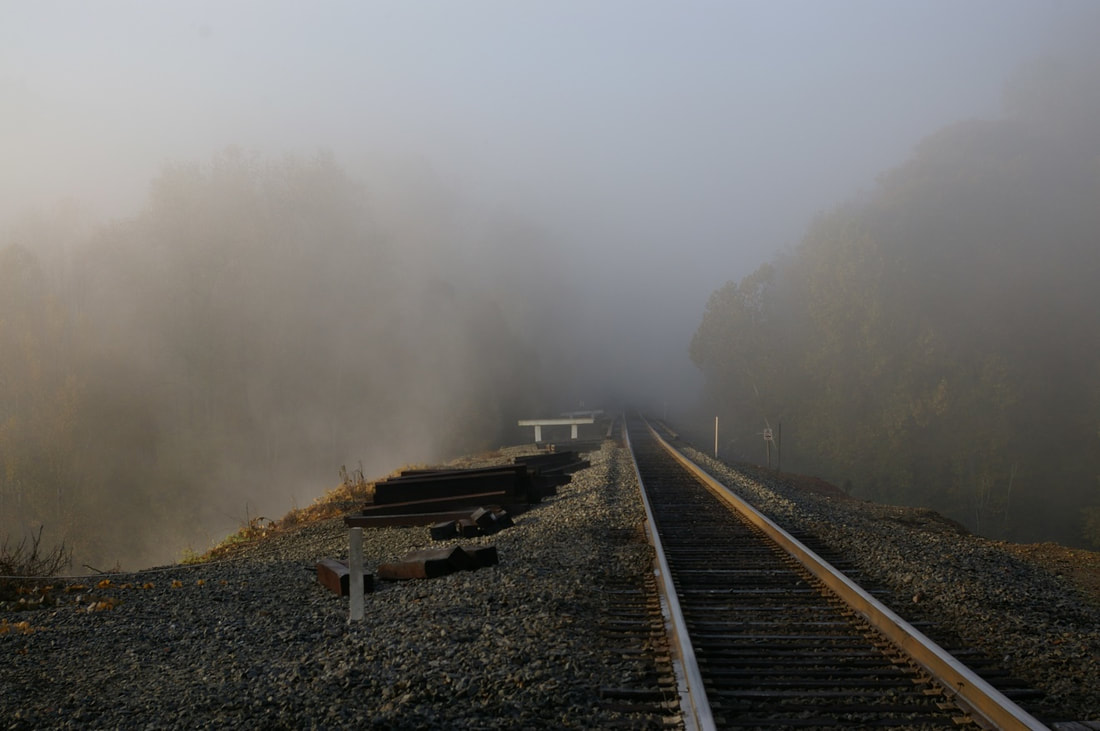 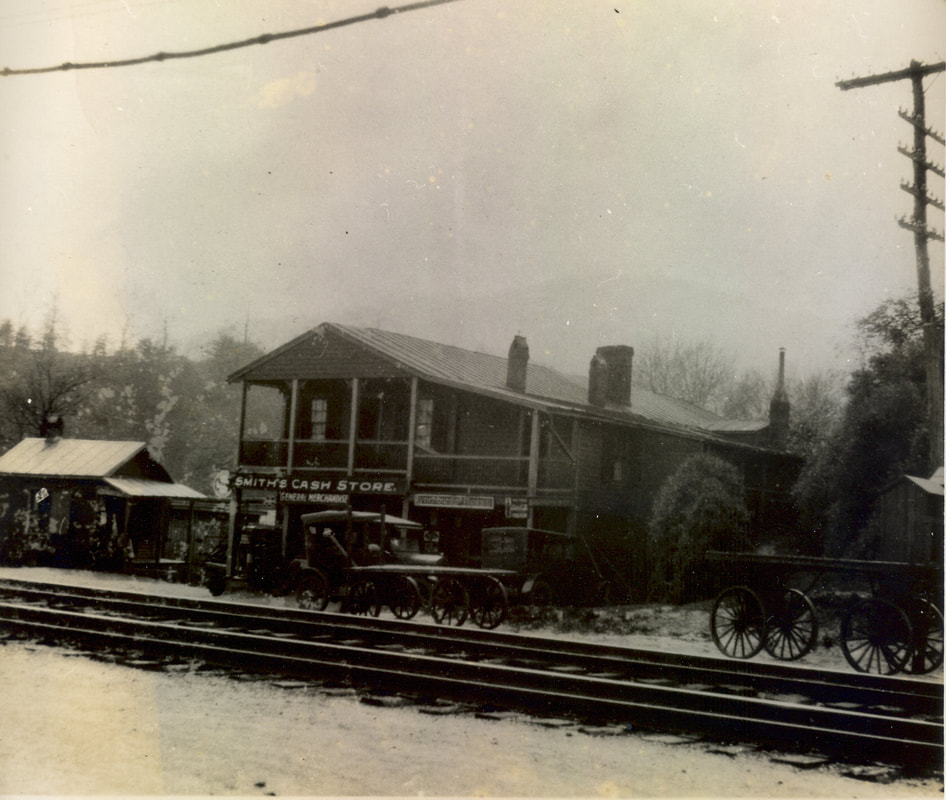 Smith’s Cash Store circa 1925. Post office on left. Photo taken from the train station platform; both train station and store are now gone. 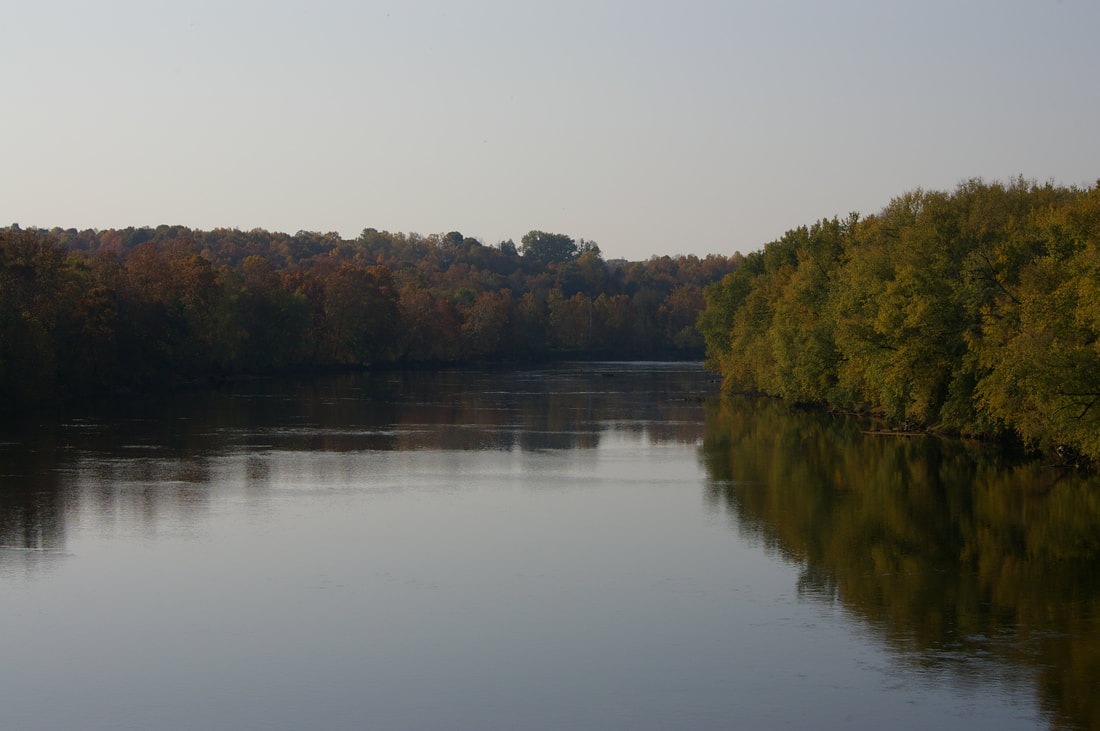 The James River near Scottsville (photograph by Alan Mawyer) 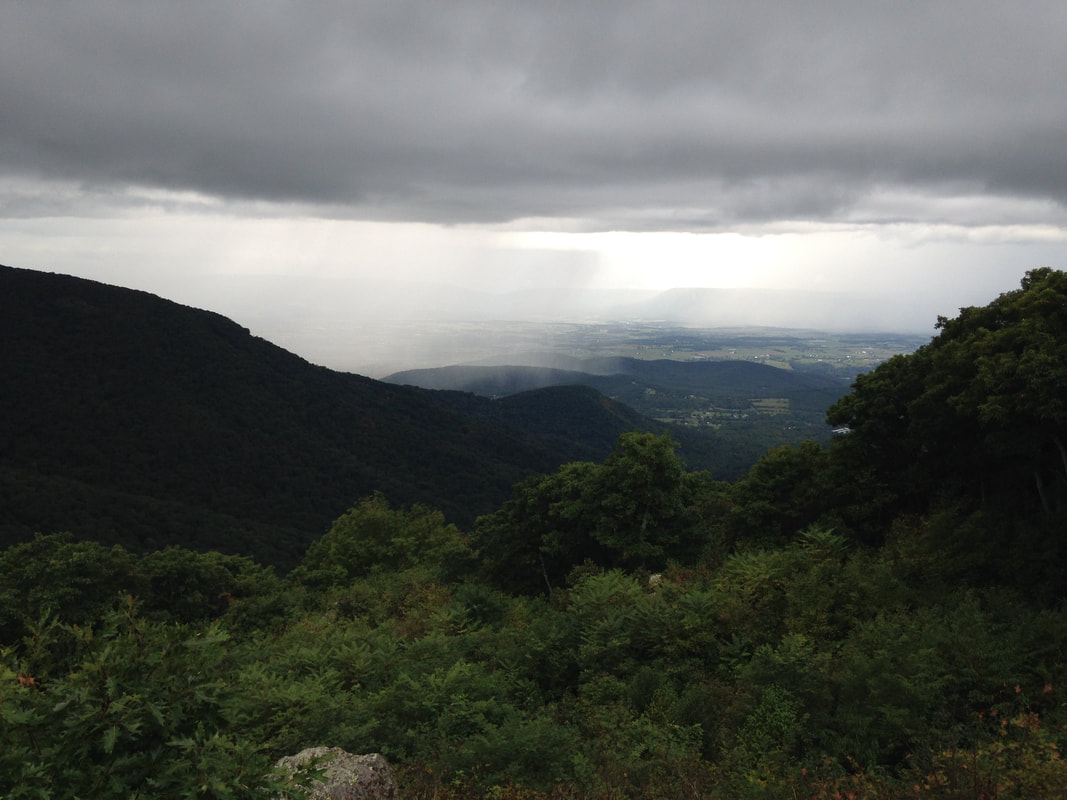 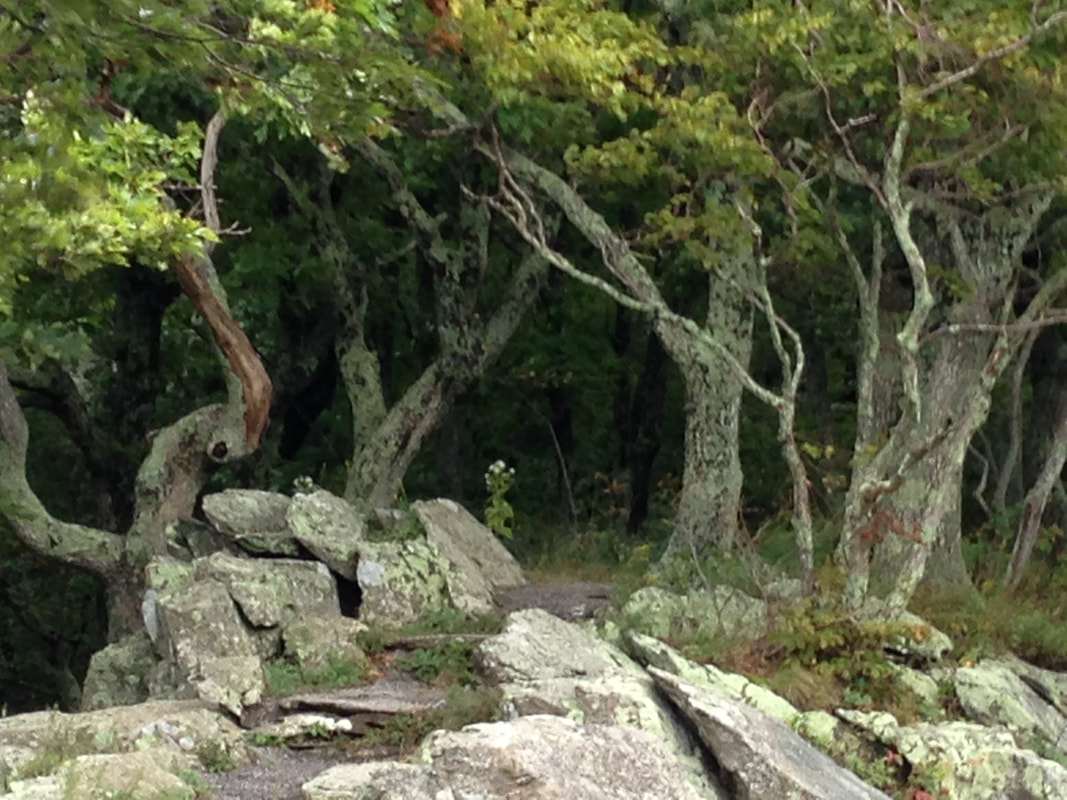